Hello, my username is Antero and I am just a simple resident evil fan from Mexicali, Baja California Norte, Mexico. I have been a fan since the first Resident Evil and I can still remember the first scary RE zombie moment when you open that closet in RE1. I've followed the games since until the movies started and some local rumours about a production needing guys around here. At first just blonde guys kinda "gringo" look (the local way to call a usa citizen) then free castings started and it didn't truly get my attention until I needed some money and I just thought "why not?"

Click "read more" to read my blog about my experiences on the set of Resident Evil: Extinction.

Just walked a quarter of a mile to the set location at Wednesday 5th July, 4am. The staff gets to move from place to place using 3 wheeled motorbikes. They also have some vans for paramedics and the directors. The site is a whole row of tents and trailers used to mostly get everything, including us, ready and there are a few trailers for the set. There are also trailers for the cast and some of the super-zombies. I am a Type C Zombie. I need my entire face covered in make up because I don’t wear a mask, so they need to make me up with black eyeliner and more of that kind and after that they put grey mud over every single spot of my skin and hair. There are 4 different kinds of zombies. I am a Type C and as I mentioned they put make up all over my body and get me ripped clothes with everything painted, the Type Bs are exactly the same but they don’t get make up on their faces they get a simple mask that is enhanced by digital effects, Type A zombies get prosthetics all over their face and hands and they look amazing. They’re the ones you see close up in the movies as they’re better made and look perfectly accurate to the bones of the stuntmen. Finally there is a new type of super-zombie made by Umbrella for the film that are called Stalkers. They are played by Canadian stuntmen have a body like a body builder. They’re bigger and their skin has a lot of tumors made with special stuff for it. Their faces look perfect and they really look just like a primitive Nemesis from the second film.

Getting breakfast, they supply us with fruits, eggs, potatoes, some pork, nice bread and a lot of juice and water to get us ready and full of energy for an exhaustingly long day. Then we have to go to wardrobe where we wait our turn to get our clothes. It is a bit of a mess to get some good size clothing because mostly it’s too short for me. I searched for some ripped clothes painted with blood and black colors until finally I found my clothing, some jacket and suit pants. Finally at the end of this we get to go to the make up section where first apply black eyeliner and paint all over our face, then they paint our teeth with black color and we wait our turn to get the grey mud all over our skin and hair, which we then have to dry in front of a huge fan for about 15-20 minutes, but after a while in the desert with the sweat most of us end up applying the grey mud by ourselves, even if it’s just to refresh our skin.

Finally we need to wait for about an hour or even more for them to get the set ready for our shoot. The set is weather station, a supposed "fortress". It's made of wood and it’s about the size to an entire gas station or a 7-11 counting the gas section. The roof is flat and it’s all made of the same material. It is all the same brownish color. It looks like a common and simple weather station except when you spot the wire fencing and the Umbrella chopper. It is a black Huey helicopter with a prominent Umbrella logo on it. The fortress has a pit where they supposedly drop corpses and body parts. All of the weather station is surrounded by fencing and wire giving the impression the zombies could try to climb the fence in the film, the Huey seemed to me to be an evac helicopter because of its size and the speed they flew it at. Besides it didn’t have a single gun on it. At the side of the fortress there is a crashed tanker truck also prepared for something like a riot or in this case a full zombie attack. The truck has a battering ram, or what it’s called in Spanish "tumbaburros" (donkey knocker), to move anything to the sides and steel grills on the windows. The weather station/fortress has a guard tower near the pit. The pit is in a hut close to the house and to the side, seems very innocent at first view but inside Umbrella ops come and go. The tanker at the side is supposedly crashed into the dune but it didn’t explode. I suppose it doesn’t have any gas in it and is just for moving something else.

The main movie staff is made up of Americans. They almost never talk to us but we do chat sometimes, but just as regular people, not for work. The ones that talk to us and serve as supervisors are a crew of Argentineans and Mexicans who tell us where to stand, how to group and how we will move. In this scene a group of zombies attack the driver of the gas tanker. The front lines are made up of the A zombies and it’s they who will mainly be ripping the tanker, and at their sides and behind them will be the B and C zombies helping to rip all the way to get the driver of the tanker with a huge, if not giant, fan throwing sand at us, getting it all over our bodies whilst we attack the tanker.

My position is really close to the expensive zombies. In just this scene we spent two, if not three, hours working on it and 8 or 9 takes just for this attack. At the end every single extra was covered in sand. Finally the scene is over and we get our rest. We have about 30 or 60 minutes for each rest and every time we need to do a lot of drinking and get some food for energy. Some of us get more make up because the sweat and wind takes it all off. Sometimes some of us even apply it ourselves because of the heat. In our rest zone there is a lot of shade and fans and we get a buffet with a lot of fruits, chicken/fish and bread, a lot of Gatorade and more to get fluid to our bodies after wearing these heavy and warm clothes in weather close to or even in 122 degrees.

During this rest we saw some guys wearing Umbrella vests with the logos and looking like regular Umbrella soldiers and pilots coming from the trailers. They went on to the set whilst the Umbrella helicopter was flying in circles around a hill and the fortress for an hour. We kept resting whilst this happened with some of us searching for just a spot of shade to rest under, even under the trailers. And then they wanted some shots of us looking aggressive and trying to press our bodies against the fence in apparently an attempt to take it down with our sheer numbers and press against it with other zombies apparently coming from everywhere else around the sand dunes

Finally at the end of this day we get to the rest/buffet zone where we all take our paychecks in a huge line. Whilst I was queuing I managed to see Claire Redfield (Ali Larter) passing wearing exactly what that one pic online had but with some green mercenary vest, but she didn’t have a hat or a ponytail. She talked to some zombies and made her way to the set. I also saw what was apparently Carlos Oliveira’s (Oded Fehr) stunt double making his way, wearing another mercenary vest and looking a bit like an apocalyptic Chris Redfield. After making sure I got my paycheck I took the bus home at around 7pm.

Here is a photo I took of some fellow extras.

http://groups.msn.com/Biohazard5
I'm just a man who's good at what he does: killing. 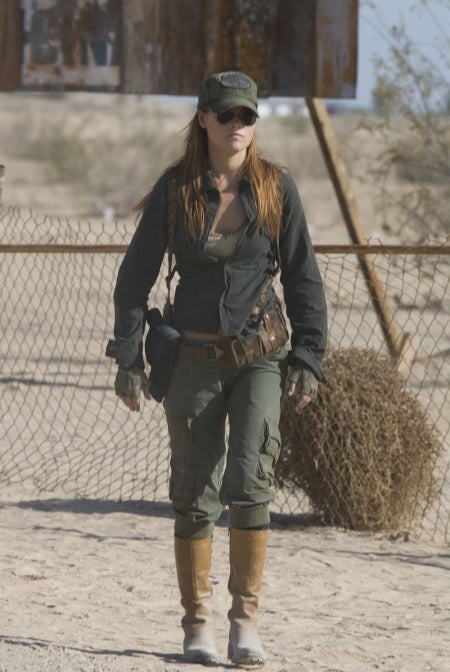 0 x
si se parece, dehecho un par de paginas atras lo dijeron, y creo hasta pusieron esa foto, a lado de la de sara connor.
What if everything around you,
Isn't quite as it seems?
What if all the world you used to know,
Is an elaborate dream?
Arriba

I'll never give, i'll never give up, and i just wannabe wannabe love.
I have to follow my heart, no matter how far, i've gotta roll the dice, never look back and never think twice.
Arriba